This cinnamon roll banana bread is moist, filled with cinnamon sugar, loaded with bananas, and topped with a delicious cinnamon glaze. The best of both worlds!

Cinnamon Roll Banana bread is a kind of dessert or breakfast that never disappoints. This recipe is really easy to make and you can even add your favorite nuts or chocolate chips to your batter. Also, you can leave the cinnamon sugar out for a less sweet version.

The answer is simple! Although I love cinnamon rolls sometimes they take time to make them. So, when I’m busy and craving bananas and cinnamon rolls, I rather make this recipe. It’s ready in less than an hour and my family loves it.

What do you need to make cinnamon banana bread?

I have other banana bread recipes here that you can also try:

I hope you give my recipe a try and love it as much as we did! Let me know what you think! Leave a comment below. Also, don’t forget to take a picture and share it on my Facebook page or tag it #thehungrydragonfly on Instagram! I love seeing your creations!

I share vegetarian and vegan recipes that are simple to follow and require friendly ingredients that are easy to find. Because life is about having a balance. I create healthy recipes and also some comforting dishes, as well. What else can you find here on my blog? I share seasonal baking recipes and tips, lifestyle ideas, pet friendly road trips and coffee shops. 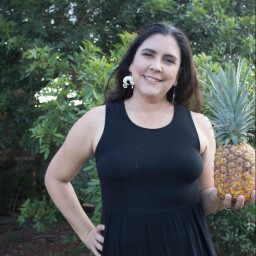 Using natural powders to make the perfect buttercream frosting is a great alternative for food coloring. Plus is vegan and tasty! We all know that artificial food coloring is packed with toxic chemicals that are harmful for our bodies, especially children. To make it just mix a few teaspoons of your powder with a tablespoon of water, whisking to combine until you have a paste. Then using a strainer you can remove any lumps, let it rest for a few minutes and then add it to your buttercream. The colors will darken as the buttercream rest! Happy baking!👩🏻‍🍳♥️
Here’s another Healthy Dog Treat recipe! This recipe is filled with nutrients and is so easy to make. My dogs loves it! Here’s the recipe:
Mastering the art of making easy artisan no knead bread!! This whole wheat bread was baked in my cast iron Dutch oven to perfection. So far I made whole wheat and white bread and it’s been delicious. Now to master the gluten-free bread. Let me know if you want this recipe for whole wheat bread. It will be posted on my blog soon.
I had so much fun making this gothic cake! I made everything from scratch, including the skulls 💀 The black buttercream is easy to make and taste like an Oreo cookie. You don’t need food coloring or any crazy ingredients to get that gorgeous black buttercream. The recipe is at the end of the video 💀🖤 Happy baking mis amores 🤍🖤
How do you make the perfect buttercream frosting? These are my favorite tips!!👩🏻‍🍳#thehungrydragonfly
We’re so glad to live close to #portlandoregon because all of the amazing places you can visit, especially food!! @mama.dut.foods is the best Vietnamese inspired vegan food in the area!! Even my non vegan family enjoys it. I totally recommend you to stop by when visiting the #pdx area! Our favorites are the Tofu Banh Mi and the Bao Buns with fried oysters!! They have a vegan deli and also desserts!
Privacy & Cookies: This site uses cookies. By continuing to use this website, you agree to their use.
To find out more, including how to control cookies, see here: Cookie Policy